A Brief History of Milton

The village of Milton has developed over time on essentially river gravels over gault clay to the west of the River Cam, at a height of 5-8 metres above sea level. The predominantly light soil is excellent for growing crops which has been a major factor  for encouraging people to settle here since prehistoric times.  Archaeological evidence as worked flints, indicates that people were in Milton from 10,000 to 2,500 BC (Mesolithic to Neolithic), followed by Bronze Age 2,500 to 750 BC and Iron Age settlers 750 BC to 43 AD as indicated by pottery finds in various parts of the village.  The Romans in the first five centuries AD lived at a number of  Romano-British farmsteads in Milton producing grain, and using local cooking pots and milling stones, and Roman coinage.  Products were transported from Milton via the River Cam to the Roman Car Dyke at Waterbeach and beyond, and also by road along the Mere Way constructed by the Romans running from their military camp in Cambridge along the western present boundary of Milton parish to the fens.

The Romans started leaving Britain around 410 AD, but were soon replaced by the Anglo-Saxons from northern Germany. Evidence for Anglo-Saxons in Milton is limited, but what there is, is representative of their presence for 500 years before the Norman Conquest in 1066.  The local view that Hill Close between North Lodge Park and Fen Road, was the first village site for Milton, is supported by archaeological finds of metal and pottery sherds dated from the early Pagan Anglo-Saxon period to the later Christian era.  Archival evidence suggests that a probable timber church was built on the site of the present All Saints’ Church not far from Hill Close.  The Anglo-Saxons also gave Milton its first name of  ‘Middeltun’ – half way between two other local settlements, perhaps Waterbeach and Cambridge.

Following the Norman Conquest in 1066, stone churches replaced the earlier timber churches as found in Milton. The oldest part of All Saints’ Church is the Romanesque round arch between the nave and the chancel; date late 11th century or early 12th century (further development see below).

Associated with the development of All Saints’ Church through the Medieval period, was the development of the manorial estate. Archival and recent archaeological finds, notably pottery, indicate that the first manor house was constructed of timber, sited at the western end of Hill Close associated with a moat in 1235.  However, other archival and recent archaeological evidence indicates that the manor was plundered and burnt in 1266 by rebels supporting Simon de Montfort: another manor house may have subsequently been built on the same site at a later date.  A Tudor manor house was built around 1530 by the lord of the manor and judge, William Cook, which was situated just north of the church.

Between the 13th and 17th centuries, the main features of All Saints’ Church that we see today developed.  At the time of the Domesday survey in 1086, the population of Milton was around 40, by 1279, there were 75 inhabitants. Three hundred years later in 1563 there were 36 households which by 1676 in the reign of Charles II, had expanded to 40 with 86 adults.  Milton was primarily a farming community, farming land owned by the manor, the church (glebe land) and later, additionally by Cambridge colleges; the people lived in humble cottages built of timber with thatched roofs.  Also during the early part of this period, the Normans gave Milton the name of Middeltone, which later became Middleton and finally Milton after the reign of Edward III.

Milton in the 17 Century

Distinctive timber framed houses with rendered walls, some thatched and 16th century in origin, remain in the village today as typically 17th century houses.  Notable examples are 1 and 2 Church Lane (although only half of 1 Church Lane is original, the other half being a 20th century addition). 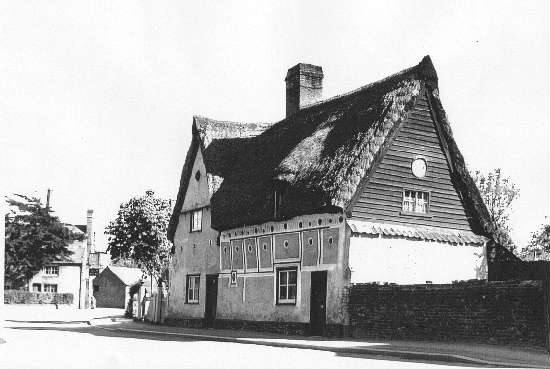 Nearby in Fen Road, is Queen Anne Lodge of similar age and still thatched 50 years ago until being replaced with variegated tiles.  Opposite Hill Close down Fen Road is a thatched cottage previously called Strangeways, but recently re-named Magnolia Cottage.  This was once 2-3 living units before being combined as one dwelling (part of the garden is now occupied by a 21st century ‘eco-house’). The Brewers Inn at the junction of Fen Road and Church Lane is a late 17th century or early 18th century building originally timber framed and plastered, but now is encased in early 19th century gault brick; this modernisation is a frequent occurrence with earlier buildings,  Before 1925, The Jolly Brewers (as it was then known) was also a brewery run by the Essex family.

Milton Hall and the 18th Century

Milton in the 19th Century

A History of Milton in Maps

A History of the Road Names in Milton