A History of Milton in Maps

The development of Milton over the last two centuries, and especially in the last three decades, is neatly illustrated by these Ordnance Survey maps, all reproduced to the same scale and covering the same area.

This first map shows Milton at the start of the 19th Century. It’s from the first edition of the one inch to the mile Ordnance Survey of England and Wales. The engraving is from 1836 based on the survey done between 1808 and 1822 but extensively revised in 1834 and 1835. The exception is the railway, which was added to the map later. 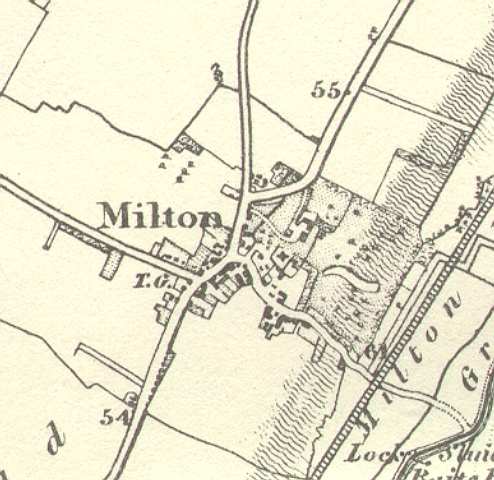 The only roads in the village are the high street, Butt Lane, Fen Road and Church Lane. The turnpike road from Cambridge to Ely (now the A10) runs through the village but follows the course of High Street having being diverted around Milton Hall’s grounds in the previous century (see “A Brief History of Milton”). Note the mile stones are shown along with the number of miles from London. The 55 mile stone still remains outside the allotments.

The edge of the river flood plain is also clearly marked, being the hatching running diagonally up the right side of the map at around the 5m contour as you will see on later maps.

Turn of the Century 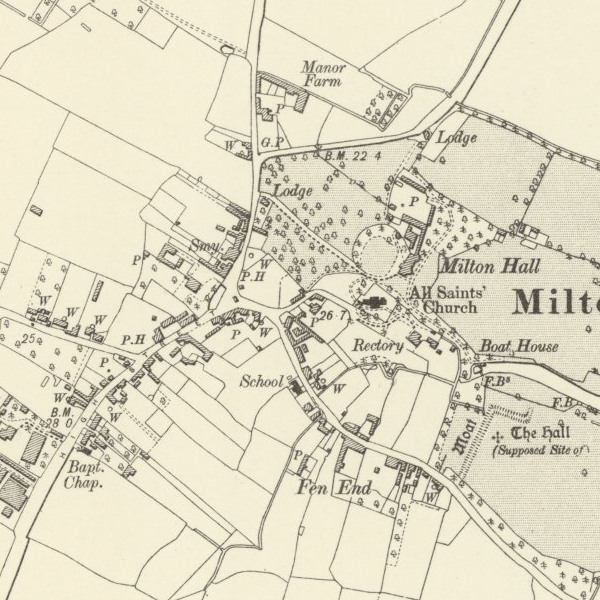 You can see the original village school in Fen Road (which was demolished to create Hall End). We believe the various “W” marks around the village indicate the location of wells, (and the “P” marks may be water pumps?). “P.H” are the pubs: the Lion and Lamb to the west and the original Waggon and Horses – which burned down and was re-build, to the east.

This is from a wartime era Ordnance Survey map from this web site. It’s identical to, but better coloured than, the a map we previously had here from Richard Meredith which was dated 1942 so it probably illustrates how Milton looked shortly before the war. 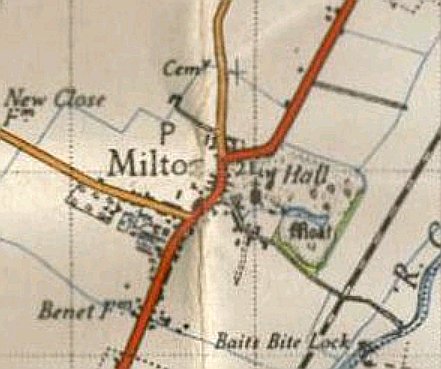 It’s noticeable how little has changed since 1836. The cemetery on Landbeach Road is the only obvious addition. The war was to change this considerably as the aerial photograph we have shows. 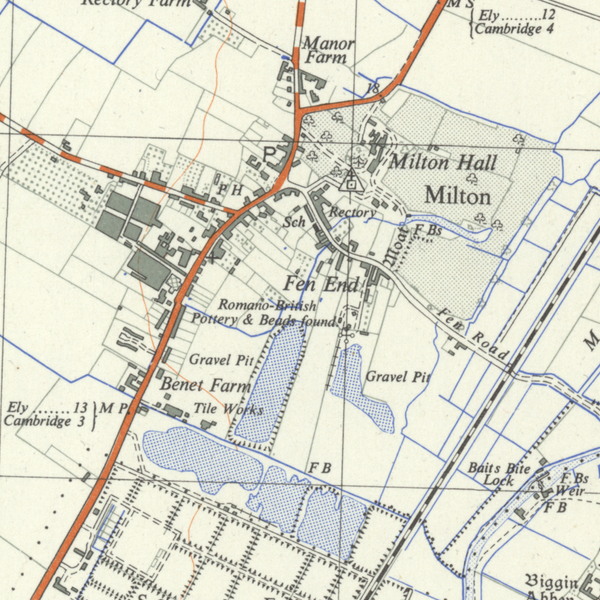 In many ways what’s most interesting on this map is what’s happening to what was to become Milton Country Park. The original pit on the land between Dickerson’s and Todd’s (where Hall’s can now be found), which had been dug by the time the aerial photo was taken during the war has disappeared but Dickerson’s is starting to appear. There seems to be a light railway line on the western side and it looks like the gravel was being extracted via Fen Road using what is now Shirley Close for access.

Meanwhile south of the Thirteenth Public Drain everything is gravel pit: so that’s the memorial meadow, play areas, orchard, Visitor Centre, car park and everywhere up to and including the majority of the industrial estate. How things have changed.

Moving much more up to date this is from the Ordnance Survey 1:25,000 Pathfinder 982 (TL 46/56) and is dated 1985 although actually represents the situation slightly earlier. The high street is now back on its previous alignment but the A10 now bypasses the village and the A45(T) (now renumbered as the A14) has arrived and is just visible at the bottom of the map. 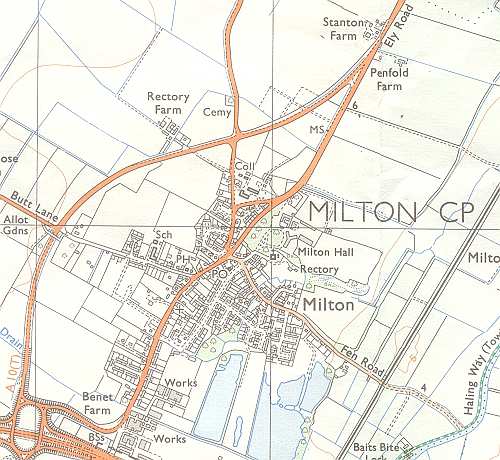 The map shows the developments that had happened in the previous two decades, especially to the east of the high street and south of Fen Road where Coles Road, Old School Lane, Shirley Close etc are shown. Other smaller developments visible are Willow Crescent and Benet Close and the gravel pits that were about to form part of Milton Country Park.

This last map is from the Ordnance Survey 1:25,000 Explorer 226 and is dated 2000. The new estates of The Rowans and The Sycamores south of Fen Road and Humphries Way and Froment Way north of Fen Road have filled up the space between the village and the bypass. 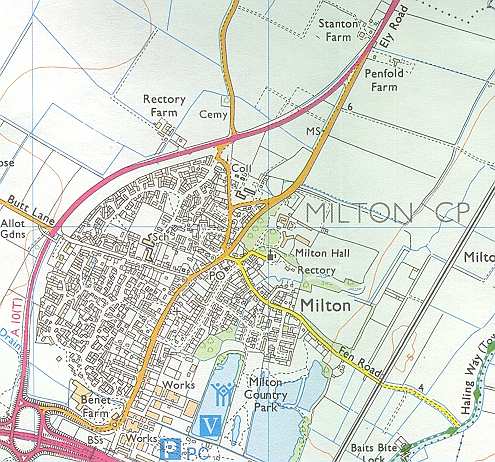 The Tesco store has appeared (still labelled Benet Farm although this had long since gone), new industrial units have appeared (especially Cambridge News’ offices) and the gravel pits are now labelled as the Country Park.